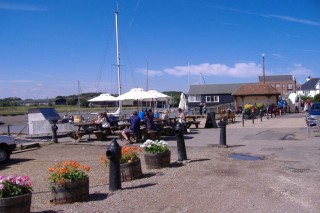 Wivenhoe is a small town located in the borough of Colchester. The work of preparing the Wivenhoe Local List was carried out entirely through the voluntary effort of the Wivenhoe Townscape Forum.

An unsuccessful application to have a building added to The National Heritage List for England prompted members of Queens Road Residents Association (QRRA) to seek to have that building added to the local heritage list; however, Colchester Borough Council had no local list for Wivenhoe.

Two members of the Association who had already researched the historic character of Wivenhoe expressed an interest in facilitating a project to establish a local list and arranged a general meeting with key interested parties in the town, including Wivenhoe Town Council and the Wivenhoe Society. A proposal was subsequently submitted to Colchester Borough Council outlining how, in consultation with the local authority, volunteers could prepare a local heritage list for Wivenhoe.

When the local planning authority resolved to support the proposal, articles were placed in the local press inviting the community to participate in the preparation of the local heritage list. As a result, the 10 strong Wivenhoe Townscape Forum was formed comprising the two facilitators from QRRA, local historians, architects and representative members from both Wivenhoe Town Council and the Wivenhoe Society.

The parish of Wivenhoe was divided into six discrete areas. Volunteers surveyed each street in their designated area, photographing and recording the details of candidate entries on paper record sheets devised by the facilitators. For the sake of consistency across Colchester Borough Council’s administrative area, Wivenhoe’s selection criteria broadly mirrored that used by the Colchester Historic Building Forum when they established a local list for the old borough of Colchester. However, following the publication of English Heritage’s draft Good Practice Guide for Local Heritage Listing, the Wivenhoe project also included assets such as open spaces and street vistas which the community perceived as a source of local identity and distinctiveness. During the surveying exercise, several articles were published encouraging the community to submit nominations for the local heritage list.

The two facilitators kept in regular contact with local authority officers, keeping them abreast of progress and when necessary, seeking their advice. On completion of the surveying exercise, the paper records were digitised at first into Word and subsequently into pdf files for ease of distribution. The draft list was then delivered to the local authority for their approval. Having been comprehensively briefed by the volunteers throughout the process, the local planning authority was happy with the format and content of the draft list.

The facilitators sent letters to the owners / occupiers of each heritage asset informing them of their inclusion on the draft local list, the letter included a copy of the relevant record sheet. There followed extensive publicity for the draft local list including a consultation day, organised by the volunteers, where members of the Wivenhoe Townscape Forum made themselves available to answer any questions from the local community about the draft list. In the light of the consultation day, one entry was removed from the draft list at the owner’s request.

The final version of the local heritage list for Wivenhoe, created by the volunteers of the Wivenhoe Townscape Forum and verified by a principal planning officer at Colchester Borough Council, was then presented to the Local Development Framework Committee by a member of the Wivenhoe Townscape Forum. The Committee adopted the local heritage list in March 2012

This community driven approach has produced a local heritage list that provides an invaluable planning tool for local authority use; it will be added to the Essex Historic Environment Record.

Further information can be obtained from the two facilitators Pat Marsden or Sue Glasspool.

The 75 records of the Heritage assets on the Wivenhoe Local List can be viewed at:

The Local List is subject to an Annual Review every March and further details of this can be obtained from the Spatial Policy Team at CBC at: