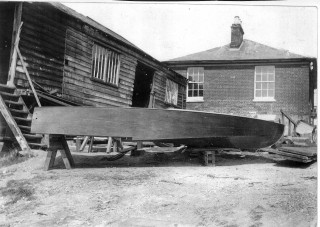 A hydroplane with stepped hull outside shed, an example of the company's versatility. The Husk family home stands behind the shed. Probably in the mid 1920s.
Nottage Maritime Institute 02048b 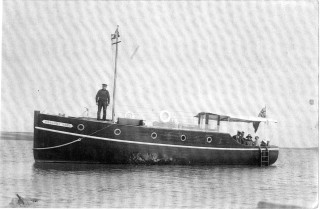 The Margaret Mary was a typical example of the sort of custom built motor cruisers which the firm built after the First World War.
Nottage Maritime Institute 02048d 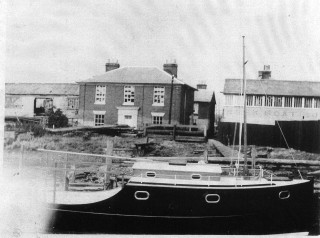 A new Husk's cabin cruiser in front of James Husk's old house. This is typical of the more or less standard cabin cruiser. The house is now called "The Old Customs House".
Nottage Maritime Institute 02048f 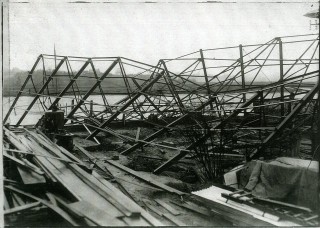 Husks decided to build a much larger new shed to cope with a growth of business. Unfortunately, the new shed collapsed in a gale when under construction, and had to be dismantled and rebuilt.
Nottage Maritime Institute 02048i 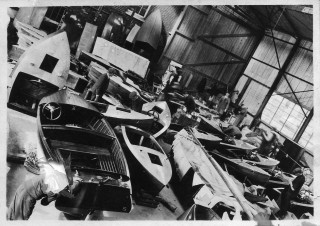 The big new shed was rebuilt and, as is evident from this picture, soon became filled with boats being built and repaired.
Nottage Maritime Institute 02048v 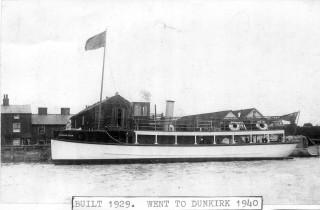 The Gondolier Queen was a 37grt motor passenger vessel. 56'6" long, she was completed in 1929 for the Swanage Motor & Speedboat Co. Ltd of Poole. In 1939 she was acquired by H. M. Government, and in June 1940 she was at Dunkirk. Returned to her owners after the war, she was sold in 1947 and renamed My Queen.
Nottage Maritime Institute 02048m 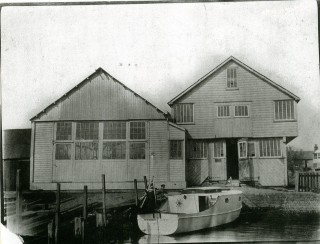 James Husk was born in 1822.  He is thought to have started working as a builder but seems to have switched to boat building fairly early,  He is recorded as having built a boat, the 10 ton smack Arcania, in 1848 from premises on the Quay.

He became a prominent member of the Swedenborg  church, and  provided some of the money for building the church in Wivenhoe.  He also built an 11ton smack for himself which he named Swedenborg.

The business became  limited company James Husk & Son Ltd, and carried on until its final closure, under that title, with a succession of James Husks and of sons.

From the 19th century mix of smacks and small yachts, the firm began to specialise in motor yachts after the First World War.  However they produced a variety of vessels from the little paddle boats for children to hire on the lake in the Colchester Castle Park to quite big vessels like the Gondolier Queen of 1929.

In 1937 the company went into voluntary liquidation, but, still unsold, was revived two years later to build three small motor cutters for the Navy, before the government requisitioned the yard for use by Vosper & Co. Ltd of Portsmouth in 1940.

When the yard was returned to James Husk in 1946, he was 67 years old, he was ready to retire, and had no children in a position to take on the business.  His son, Richard, was still only fifteen in 1947 when Husk’s business was sold.  Richard Husk, who as a boy had looked forward to becoming a boatbuilder, went on to have a very successful career as an officer in the Royal Navy.