About Wivenhoe Old Quay and the Wivenhoe Shipyard 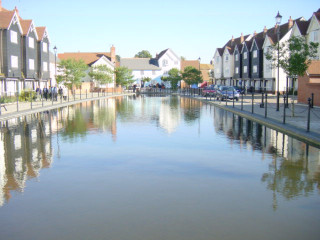 The Dry Dock, so-called as it was constructed as a place in which large boats could be floated in from the river, gates shut behind it and the water pumped out.
Peter Hill (in 2002) 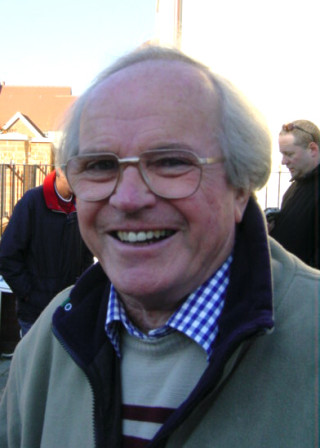 Don Smith who lived in Ernest Road, worked in the shipyard office and gave talks about the maritime history of Wivenhoe
Photo by Peter Hill 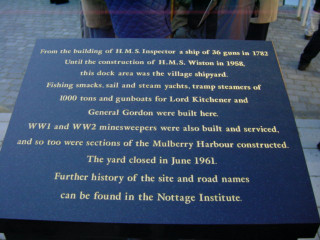 The Plaque erected by Wivenhoe Town Council in 2002, paid for by Persimmon Homes who erected the homes surrounding the Dry Dock.
Peter Hill 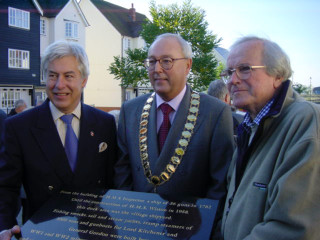 The upstream boat/ship-building yard has been in existence since 1528. It has been owned by a great many people since then. For a full list of the owners of this upstream yard click here.

Wivenhoe Shipyard was the last shipyard to operate from the site. It ceased operations in 1960. It was later sold to K. Gliksten & Son Ltd for use as a timber importing wharf and a place for the temporary storage of timber. In 1981, it was sold on to Wivenhoe Port Ltd who expanded the use of the wharf bringing in a lot more cargoes into Wivenhoe on small coastal vessels up to 1200 tons. Many of these cargoes were either dusty, as coal, or smelly as fish meal.

In 1988, a public enquiry was held in Wivenhoe, in the William Loveless Hall, to determine whether a planning application to expand the operations of Wivenhoe Port Ltd could proceed, or whether the land should be sold for housing.  In the end, as everyone now knows, it was sold for housing and nearly 300 homes were added to Wivenhoe.

It was a sad day in June 1961 when Sid Ham, the timekeeper at Wivenhoe Shipyard rang the bell for the last time. The workforce was down to some twenty hands, and the last contract for the Admiralty was finished; there was hope that we would be building yachts, but unfortunately this work went to Burnham. This was the end of the last phase in the four hundred year history of this four and half acre site, upstream of the Quay.

The beginning of World War Two saw the yard derelict, having had a forty year ban imposed by Shipbuilding Securities Ltd on steel construction in 1937. But the need for extra naval patrol boats and mine sweepers was soon recognised; a new company called Wivenhoe Shipyard Ltd was formed by The Rowhedge Ironworks Ltd on behalf of the Admiralty, and so began the last 21 years of shipbuilding on this historic site.

The output during World War Two was a great credit to all concerned. When it re-opened in November 1939, the Yard was overgrown with weeds. The dry dock had tons of mud in it despite the efforts of George Hillyard, the landlord of the Shipwrights Arms, who was retained by the landlords to keep an eye on the dock. It was a losing battle as the dock gate always leaked.

The dry dock was very important, being the the only one on the coast between London and Lowestoft. During World War Two it was never empty; drifters and trawlers came to Wivenhoe in their dozens to be converted or maintained for mine sweeping. New wood construction of the Mickey Mouse class, ninety foot overall, was started and the larger 126 foot motor mine sweepers were also built. These consumed 250 trees per ship, all from a 25 mile radius of Wivenhoe. These sweepers were built largely by tradesmen who, during the slump of the 1930s had done many different jobs. The alternative, as we know, was the dole queue, but in 1940 all men who had been shipbuilding had to register and were directed back into the yards.

At the end of World War Two, work continued on motor mine sweepers for the Reserve Fleet, and also maintenance of Trinity House Vessels was undertaken. In 1951, the Yard got an order for three Ton class motor mine sweepers. These were quite large ships, over 150 foot in length, built of wood and non-magnetic metals. The last naval contract was for four 48 foot provision tenders, built in the old ‘White City’ and taken away by low loaders after being lifted out by Cook’s Shipyard.

In the 1950s, the Yard had acquired the barquentine “Cap Pilar” which had been lying at Railway Quay.  Her seams had opened up and she was slowly sliding into the main channel, so the Borough Harbour Master had instructed she had to be moved. At the close of the Yard, some personnel were kept on to undertake the move into the dry dock. Ernie Cook, the shipwright foreman, Mr Frostick, the engineer foreman, and one or two other hands were kept on for this purpose. She went into the dock and there she lay until she was broken up in 1966 when the dock was concreted over and a timber yard was established on the site.

We can say without fear of contradiction that on this site, every type of vessel has been constructed in the last two hundred years. It is great heritage and now marked by a plaque in a fine plinth erected at the head of the dry dock in 2002.

As a Town Councillor during the 1980s and at the time the site was sold for housing, I had the opportunity to propose that the streets be named to reflect the site’s former past. People as Don Smith and Bill Ellis gave me suggestions and the Wivenhoe Town Council duly forwarded them to Colchester Borough Council Planning Department with a request these be adopted. This request was approved and so now roads as The Shipwrights commemorate the people who worked at the yard as well as the pub of that name which stood in West Street.  The exception to this is Admirals Walk. This celebrates the life of Rear-Admiral John Lee-Barber who had an illustrious career in the Royal Navy and lived his last years in Wivenhoe. He was known locally as The Admiral. Click here for more about John Lee-Barber.

The Plaque Commemorating the Site’s History

When the yard was sold and houses erected in its place, it was realised that there was very little evidence of the site’s actual history apart from the street names. I proposed at a Town Council meeting in April 2001 that there should be a plaque to commemorate the site’s history and then set about getting the necessary permissions, the design and wording of the plaque agreed, and dealt with Persimmon Homes, the company which built the homes at the Old Quay and which Cllr Richard Davies persuaded to fund the £2,000 cost of the plaque and its plinth.

On 18th October, 2002, with everything finally agreed and done, the plaque was unveiled by then Town Mayor, Cllr David Craze, with Cllr Peter Hill and Don Smith who contributed the wording and the design of the plaque and its plinth.

The inscription on the plaque reads:

From the building of H.M.S. Inspector, a ship of 36 guns in 1782, until the construction of H.M.S. Wiston in 1958, this dock area was the village shipyard. Craft from fishing smacks, sail and steam yachts, tramp steamers of 1000 tons and gunboats for Lord Kitchener and General Gordon were built.   WW1 and WW2 minesweepers were also built and serviced, and so too were sections of the Mulberry Harbour constructed here.       The yard closed in June 1961. Further history of the site and road names can be found in the Nottage Institute.