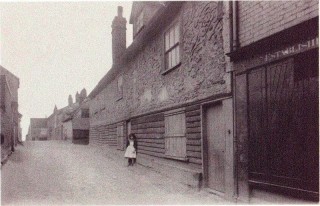 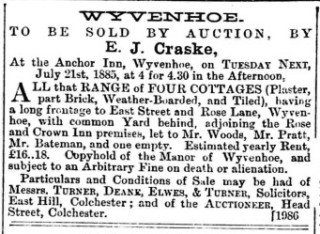 The old Garrison House in East Street was built around 1675 although folklore suggests it might have been used during the English Civil War of 1648 which implies it was built earlier.

A drainpipe is inscribed with the date 1678.  The building has pargetting on its street side, which is a form of raised plasterwork, probably used to protect the building from rain although it is very ornamental too.

The photo above was probably taken around 1900.

At one time this building was converted into 4 tenements. When it was originally built, it was a merchants house with storage on the ground floor and accommodation on the first floor.

Note:  John Collins unearthed this advertisement in the Essex Standard for 4 cottages in East Street which were due to be sold by auction on 21st July 1885.  Three of the cottages were occupied it seems with one empty. Their estimated yearly rent was £16 and 18 shillings. It is not known how much they fetched at auction.  Added on 5th July 2016 by Peter Hill.