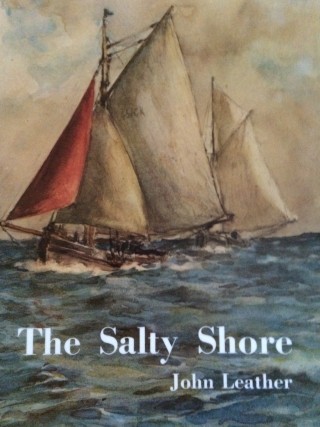 The story of the River Blackwater which shares a common, shoal-studded estuary with the River Colne. Refers to the oyster fishery protection association which was formed on 2nd September 1789 on the Blackwater and Colne Rivers by thirteen West Mersea oyster merchants, with eleven from Brightlingsea, three from Wivenhoe and three from Tollesbury. They regularly met in Colchester and paid a half-yearly subscription for the layings plus four shillings for each boat. Imported oysters from the London docks, were fattened at West Mersea around the end of the 19th century, where the layings were then worked by the Heath family of Wivenhoe.

Sailing races for Essex fishing smacks were held from 1783 onwards and one Captain Hopkins of Wivenhoe organized an event for smacks belonging to Wivenhoe, Rowhedge, Brightlingsea and Mersea, which raced for a silver cup and a suit of colours which were respectively won by Captain Cooke’s Mayflower of Rowhedge and George Wheatly’s Two Sisters of Wivenhoe. The book refers to the scale and value of smuggling in the 18th century and the revenue cutters, such as the Repulse of Colchester, built in 1778 as one of a series of six of that name owned by Captain Harvey of Wivenhoe, who hired them out to the authorities and provided the crew and often acted as commander.

At the close of the eighteenth century and the commencement of the nineteenth, William and Thomas Sanford of Wivenhoe owned three oyster layings and between the years of 1810 – 1828 ‘haled’ 9,022 wash of marketable oysters from them, the price varying from 1s 2d to 1s 9d a wash. There are references to the fishing smacks built at Wivenhoe, Brightlingsea and Rowhedge, which built most of the Essex smacks and bawleys for many other villages including the fishermen of Tollesbury and West Mersea.

In the early 1900s ‘five-fingers’, or starfish were dredged to be sold to fish merchants on the Colne or Blackwater, or direct to farmers for field fertilizer. A thick patch of them off Frinton were reaped by local smacks from Rowhedge, Wivenhoe and Tollesbury. Sprats were also harvested and one Tollesbury smack caused a ribald sensation by arriving at Wivenhoe railway quay to discharge sprats with ‘Beecham Pills’ painted in white letters across her mainsail.

A freak catch of 12 tons of pilchards by a stowboating smack was sold to the canning factory at Wivenhoe. 570 tons of sprats were landed during the winter of 1911 at Brightlingsea. After auxiliary engines were installed in the smacks after 1922, they were enabled to extend their range.

As professional yachting flourished, some Tollesbury hands who were shipped as hands in the racing classes in the 1890s usually sought a berth in the spring by walking twelve miles to Rowhedge and Wivenhoe, where yachts were laid up for the winter. The Colne surged ahead in yachting with navigation classes being held each winter at Wivenhoe and Brightlingsea.

In 1948 a specialized ‘eel barge’ was designed and built at Wivenhoe Shipyard. There is a reference to the Wivenhoe and Rowhedge Yachtowners ‘Gooseberry Pie’ event where the cutting up and eating of a giant pie on board the largest craft was the excuse for a little cruise.

There is a photo of William Wyatt of West Mersea with James Husk of Wivenhoe with a yacht under construction during the 1930s. William Wyatt served an apprenticeship as a shipwright at the Wivenhoe yard of John Harvey Ship and Yacht Building Company on the River Colne working on yachtbuilding and repairing and on the construction of smacks.