You are here: Home>Topics>Maps, Books, Deeds, Wills & more>Books about Wivenhoe>Sea Gates to the Saxon Shore

Sea Gates to the Saxon Shore 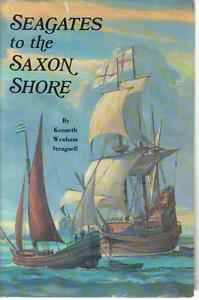 A historical account of the ‘Saxon Shore’ coastline, north of the Thames Estuary from early days through to the present century. Refers to early shipbuilding in Wivenhoe, including two men-of-war St Fagan and Jersey, the first to be built in Essex in Commonwealth days. In the mid 18th century, colliers could rarely get above Wivenhoe and it was ‘necessary for their cargoes to be transhipped into lighters, while at the same time there was a constant demand for sea traffic to take the products of a flourishing textile trade to other markets both home and abroad. All kinds of schemes were initiated to improve the river but most came to nought.’ Eventually a scheme was submitted by the brilliant engineer, Peter Bruff, for the construction of a lock at Wivenhoe, with a straight ship canal seventy feet wide leading to a dock of eleven acres at the Hythe. But it was never taken seriously. There is a reference to the constant war between ship-owners and the oyster farmers.