You are here: Home>New contributions>Gifts to St Mary's Church in 1860 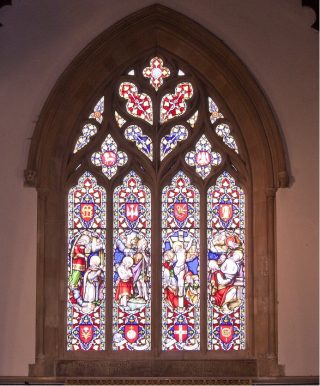 The East Window, above the Altar, the gift of the Corsellis family
Photo: Frances Belsham 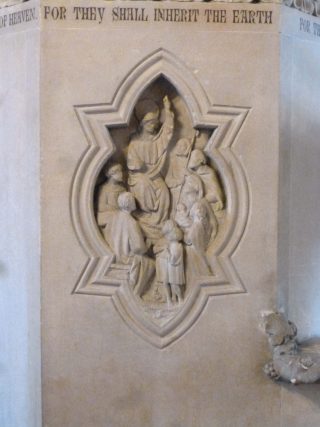 The carving in the front of the pulpit depicting the Sermon on the Mount, dedicated as a memorial to the wife of Rev E. Waters, Rector of St Mary's Church, and who died before the building work was started.
Photo: Peter Hill

Besides contributions in money, some of the principal decorations of the church are the result of private munificence.

The very handsome memorial window in the chancel was the gift of the Corsellis family, to the memory of their parents and ancestors, whose remains are deposited in the family vault beneath. The subjects comprise the annunciation, baptism, crucifixion, and entombment. In the east of the north chancel aisle is a stained glass memorial window, presented by the Rev. E. T. Waters, to the memory of his deceased wife. The two side lights represent our Saviour bearing the cross, and His appearance to Mary Magdalene in the garden; and the central light depicts Christ’s Ascension. The upper tracery contains symbolical representations of the Trinity and the Four Evangelists. These windows were executed by Warrington, of London.

Another memorial window, at the west-end of the church, representing “Christ walking upon the sea and stilling the tempest,” was presented by Mrs. Martin, in memory of her deceased husband, Captain Edward Martin, of the Marquis of Anglesea’s yacht, Pearl.

The memorial window in the church tower, behind the organ, depicting two full-sized figures of angels, expressive of praise, was given by Mr. Isaac Blyth, to the memory of his late father, at the time of the restoration of the sacred edifice. The two latter windows were executed by Cassell, of London.

The stone pulpit is a memorial donation to the church in memory of the deceased wife of the Rev. E. T. Waters, Rector,

Two beautifully-carved wood alms plates, with the inscriptions “Freely ye have received, freely give”, “God loveth a cheerful giver” were presented by the Rector.

(Note: This text is taken from the report in the Essex Standard of 13th June 1860 and transcribed by Chris Goddard)

To read about the Transformation of St Mary’s in 1860, click here