In the High Street, opposite St Mary's Church 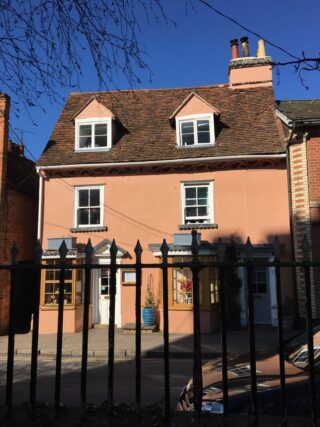 The building which was once The Grapes
Photo by Terry Garland 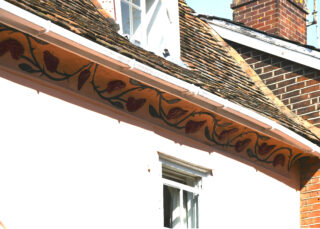 The cornice under the guttering of the building which was once the The Grapes
Photo: Terry Garland 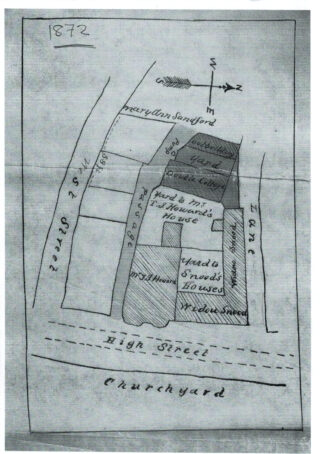 This pub located in the High Street opposite the church has few records. A 16th century building, beer house and brewery, it has a cornice decorated with grape vine leaves. For most of the 19th and 20th centuries the premises were bakeries and are now a restaurant and private residence.

The first connection between this building and The Grapes pub, apart from the cornice decoration of grapes and vine leaves now neatly picked out in purple and green, was a discussion with the team who carried out a refurbishment in 2016. Quantities of grain were discovered below the boards of the upper floor; bakers would not have ground their own flour from grain and it was realised that this was malted grain for brewing.

Two bits of documentation seems to have survived for this pub. A ledger of contributions to the poor in 1767 lists Jonathan Barker at The Grapes and the Schedules of Beer Houses and Licensees of 1762 and 1782 include an Elizabeth Corder at The Grapes in Wivenhoe. At the time of writing these are the only known licensees, and the only documentary evidence of this as licensed premises.

By the time of the first census in 1841 it was a bakery occupied by Mary Chapman. A plan of 1872 shows the property owned by a Mr. T J Howard but not its use or occupancy. It remained a bakery in the Chapman family, who married into the Last family, until 1950 when Mark Halsey took over. His name is preserved with no. 13 named as ‘Halsey’s Bakery’. The left-hand part, no. 11, became Valentinos Italian restaurant in the 1990s and at about the same time the remainder changed over to residential use.

Tracing pub landlords is generally through census and trade directory records; most of them were however only tenants and tracing ownerships is dependent on preservation and discovery of conveyances, mortgages and abstracts of title. A number of such documents have been preserved for this building and have given some other interesting connections; they are generally only from the 19th century, with references to documents from 1741 to 1872.

Part of a capital messuage “The Hartshorn”

The name Hartshorn did not initially give any indication of its size or history, however a marriage in the mid 15th century between Sir Robert Tyrell of Wivenhoe and Christiana Hartshorn was found with connections to the church and surrounding land. Little evidence has been found to date but the link of Hartshorn to a property owning knight in Wivenhoe seems compelling.

Read more about this in the link below: The Tyrells of Wivenhoe.

An 1872 Abstract of Title references a complexity of wills, probates and conveyances as George Chamberlain, his wife Elizabeth and Benjamin Turner died between 1849 and 1872 and the property was bequeathed between them. The outcome was that various properties were purchased for £550 by Mr. John Simson and subsequently sold at auction at The Grosvenor Hotel on 23 May 1872. Lot 1 was the freehold bakery run by Mr Howard and was purchased by Thomas Irvin Howard for £340.

A further complex of deaths, probates and conveyances followed in 1888 to 1916 leading to the freehold, of a property now referred to as Hartshorn, being conveyed to William Last on 10 June 1925; William Last sells the freehold to Martha Ann Duffield in 1930 but remains a tenant baker and the building is bequeathed in 1936 to Edward Patrick Duffield a flour salesman.

Familiar names now appear with the conveyance of the bakery and assignment of the goodwill to Mark Halsey and John McKay on 3 April 1946; the Halsey-McKay partnership also owned the Newlands Cafe in Church Walk, Colchester. In March 1964 Mrs Jean Halsey bought out John McKay’s 50% share and then in the 1990s sold on the properties for use as the restaurant and private residence which remain today.