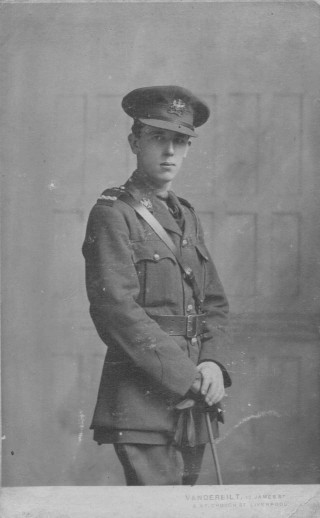 Temp. Lt. Frederick Salisbury of the Royal Engineers, Inland Water Transport Department.  His birth in Southwick, Sussex was registered at Steyning Jan-Mar 1894, the first son of Marine Engineer George, and Eleanor Salisbury who had lived at 23 Tancred Road, Anfield, Liverpool. He was the brother of William Hunter Salisbury.  The 1901 Census shows the family living at Newton, Wivenhoe, and the 1911 Census living at New Town Field, Wivenhoe. He died on 23rd September 1919, aged 25, is buried in Amara War Cemetery, Iraq Grave ref. XIV.D.6 and named on Wivenhoe War Memorial.

It is very probable that he had joined the army expecting to serve as an infantry officer like so very many others, but was selected for the Royal Engineers because of his previous knowledge of boats and rivers.  The Royal Engineers were responsible for inland water transport, the supply and movement of the army using rivers and canals.  He was posted to Mesopotamia (now Iraq). There were few roads and railways to keep the Army supplied and so the Tigris and Euphrates rivers were the main highways.  The R.E. had a bit of a problem with personnel, in that most men with experience of boats were already in the R.N.  (See H.M.S. Pirouette. and Ten paddle tugs)

Conditions in Mesopotamia defy description. Extremes of temperature, arid desert and flooding; flies, mosquitoes and other vermin: all led to appalling levels of sickness and death through disease. Under these incredible conditions, units fell short of officers and men, and all too often reinforcements were half-trained and ill-equipped. Medical arrangements were quite shocking, with wounded men spending up to two weeks on boats before reaching any kind of hospital.

This photograph of Frederick Salisbury was taken in Liverpool, and he has probably just finished his officer’s training, or is about to start it.  He is wearing an officer’s uniform but no rank insignia other than the cadet’s white stripes on his epaulets.  He also has the General Service cap badge indicating that he has yet to be appointed to a regiment.