You are here: Home>Topics>Maps, Books, Deeds, Wills & more>Deeds of Wivenhoe Property>Deed Relating to Four Parcels of Land on the High Street and Former Brightlingsea Road, 1862

Deed Relating to Four Parcels of Land on the High Street and Former Brightlingsea Road, 1862

Early Deed for the High Street and former Brightlingsea (now Belle Vue) Road) following the auctioning of plots from the Wivenhoe House Estate. It includes the properties that were to become known as the Park Hotel and Gothic House. 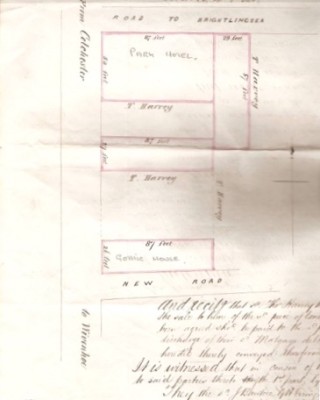 This deed relates to four plots of land being sold to John Eade, the builder, in 1862 for £201.17s. These were four of a number of building plots created when the Wivenhoe House Estate was sold to Thomas Harvey in 1859.  The financing of a tranche of these plots was secured by a firm of bankers from Colchester to the tune of £3,131.13s.4d.

Reciting that by Indenture dated 23rd May 1861 and made between the said Thomas Harvey of the one part and said John Bawtree George Henry Errington John Bawtree the younger and Jeremiah Haddock of the other part the piece of land hereinafter described with other hereditaments were conveyed to them and their heirs by way of Mortgage for securing the sum of £3131.13.4 and Interest
And Reciting that said Thomas Harvey had contracted with the said John Eade for the sale to him of the said piece of land for the sum of £201.17/- which it had been agreed should be paid to the said parties thereto of the 1st part in part discharge of their said Mortgage debt but in total exoneration of the said hereditements thereby conveyed therefrom
It is witnessed that in consideration of the sum of £201.17/- paid by said J. Eade to said parties thereto they the 1st part by the direction of said Thomas Harvey (testified etc)
They the said John Bawtree George Henry Errington John Bawtree the younger and Jeremiah Haddock Did and each of them Did grant release and convey And said Thomas Harvey Did thereby release and confirm unto said John Eade and his heirs
All those 4 pieces or parcels of land situate in the parish of Wivenhoe in the said County of Essex Three of which are abutting on the High Road there leading from Wivenhoe to Colchester and the other on the High Road leading from Colchester to Brightlingsea and with the dimensions and abuttals are? delineated in the plan drawn in the margin of abstracting Indenture and coloured pink
Together with the unrestricted use of the new Road there said John Eade his heirs and assigns paying a proportional part of the expense of keeping the said road in repair And all appurtenances thereto
To hold the said hereditaments unto the said John Eade and his heirs
To such uses as he should appoint and in definition? thereof
To the use of said John Eade and his assigns during his life to the use of said Edward Williams his executors and administrators during the life of said John Eade Upon trust for him and his assigns [remainder]
To the use of said John Eade his heirs and assigns forever
Declaration by said John Eade to bar dower
Covenant by said Thomas Harvey that he had good right to convey
For quiet enjoyment
Free from incumbrance
Further assurance
To produce deeds enumerated thereunder
Covenant by said John Eade with said Thomas Harvey that he would fence in the said pieces of land on the North and East sides thereof and that any dwellinghouse to be erected on the said piece of land should not be nearer the said High Road than 4ft
The title deeds above referred to
27th July 1859 Indenture of this date between John Baillee Baillee (sic) and Edmund Round of the 1st part Thomas Harvey of the 2nd part and John Bawtree the younger of 3rd part
13 May 1861 Indenture of this date between James Leman of 1st part Georgianna Ann Baillee Mary Elizabeth Piggott and Frances Amelia Duffield of 2nd part said Thomas Harvey of 3rd part and said John Bawtree the younger of the 4th part
23 May 1861 The thereinbefore mentioned Indenture of this date
Duly executed and attested
Receipt for £201.17/- endorsed signed by said J. Bawtree G. H. Errington J. Bawtree younger and J. Haddock and witnessed
Transcribed and checked by Pat Marsden and Sue Glasspool 23 February 2009.