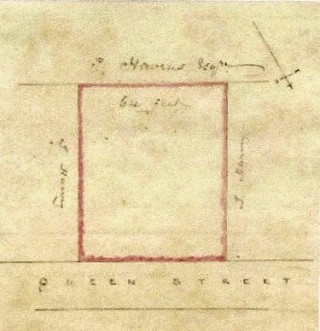 Plan of the piece of ground abutting on Queens Road later to be divided into five plots. It can be seen that Thomas Harvey owns the land to the east and west and Philip Havens Esq. owns the land to the south of the plot. The plot itself is 64 feet wide.
Photo from the original deed

This deed relates to a plot of land being sold to John Eade, the builder for £66. This was only one of a number of building plots created when the Wivenhoe House Estate was sold to Thomas Harvey in 1859.  The financing of a tranche of these plots was secured by a firm of bankers from Colchester to the tune of £3,131.13s.4d. Five terraced houses were built on this plot which later became known as 22-30 Queens Road.

Conveyance of a piece of Ground situated in Wivenhoe Essex Dated 7th October 1862 between Mr Thos Harvey and his Mortgagees to Mr John Eade.

Received the day and year first within written of and from the within named John Eade the sum of sixty six pounds being the consideration money within expressed to [ ] paid by him to us witness George Lay, Clerk to Messrs Barnes and Neck Solrs, Colchester.