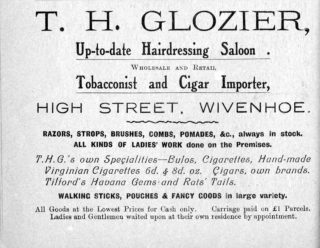 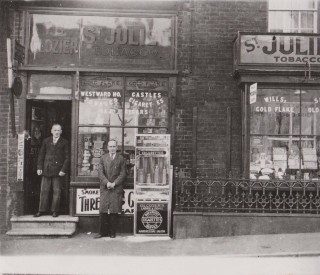 Tilf Glozier Senior and Junior outside their shop (now an estate agent) opposite the Greyhound Public House in the High Street.
Wivenhoe Memories Collection 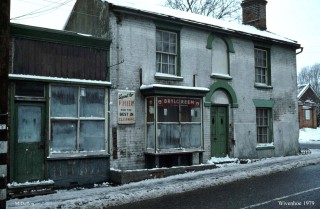 In 1911, Tilford Henry Glozier (aged 27) lived on the premises (61 High Street) with his wife Maggie, 27 and son Tilford Bertram, aged 3. The Glozier family worked and lived on these premises for over 50 years.

During World War 1 the general public were encouraged to send cigarettes and tobacco to the men at the Front. The Post Office allowed these “comforts” to be sent by letter rather than parcel post.  Tilford Glozier began by selling just cigarettes but he soon expanded into importing tobacco and sold both as wholesale and retail including Glozier’s own brand cigars: Havana Gems and Rats Tails.

By the 1950s, Tilford Junior had his name above the shop. The main part of the business was now a tobacconist and sweetshop but hairdressing was still offered in the family “front room”.

Read an account of visiting Glozier’s for a haircut, and bubblegum cards in the 1960s here