Some things of interest 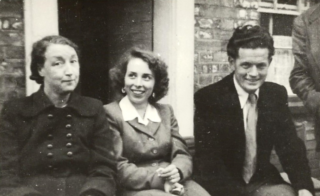 Landlord of The Grosvenor with Glady Rutt
Helen Douzier

Shipwrights were the men who built the boats in the riverside shipyards.

They were busy places employing a large thirsty labour force.  When the whistle blew the shipwrights headed to the Grosvenor for a pint or two.  They would sit around, play darts and sing songs to a little squeeze box.

Glendower Jackson remembers that when there were Darts matches, he got half a penny at the end of the evening for picking up the darts.

The ale in later years was from Tollemache Breweries of Ipswich who bought the Grosvenor in 1955.  Then in 1957 they merged with Cobbold & Co to form Tolly Cobbold.

Frank Hodgson remembers going for a pint there in the 1960s, and there were two Wivenhoe brothers John & Phil Dan painting a large mural on the wall for beer money. They enjoyed a pint!