From grocers to butchers and now hairdressers 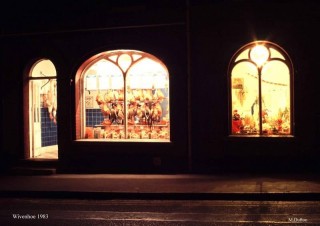 Mr. Raven’s grocery shop took over from James Moore, and then it became Alan Hayes butcher’s shop in 1970s and early 80s.

Mr Ravens – Grocers.  It is now the Hairdresser’s.  I remember in the 1950s it was Mr. Raven’s grocery shop. He keep sugar, flour and tapioca in sacks on the floor, butter was in square blocks on the counter, the cheese was cut from a large round cheese with a wire and the bacon and ham on a revolving slicer. Currants and sugar were packed in little blue bags.  Before Mr. Raven, it was owned by Mr. Moore & his brother.