The Telephone Office at 88 The High Street (formerly No. 25) 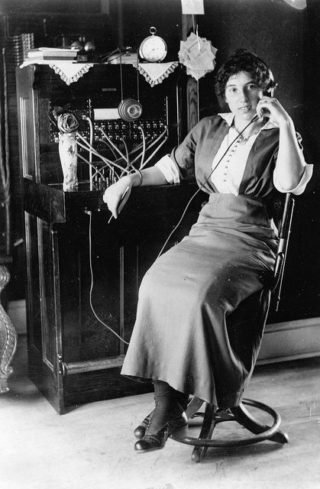 A telephone operator of the period
Photo from Vintage Photos

The National Telephone Company set up an exchange in Wivenhoe in 1909. Mrs Mitchell became the first caretaker telephone operator.

Wages were £1 per week plus coal and light to provide a service of 24 hours each day, 7 days a week.  There were only 7 subscribers in the first year, then 9 and, after 2 years, it increased to 17.

In 1920 a young girl, Violet Harris, came in to help out.  She used headphones and a breastplate for the first time. By 1925 the number of customers had grown to about 50.   Mrs Mitchell resigned in 1928 and by then the number of subscribers had increased to 150.

Telephones were first powered to connect to the exchange by a lead acid battery at the customer’s home which needed to be topped up. As the number of customers increased, it became more economical to have the batteries at a purpose-built building, and to have the operators working from the same building.

Wivenhoe’s new exchange was built in The Avenue. This has since been converted into a private house called The Old Exchange, a few doors up from the old Cedric’s Garage.