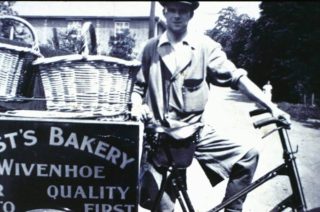 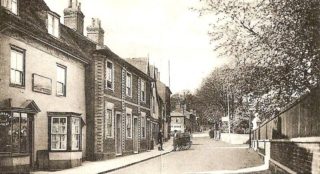 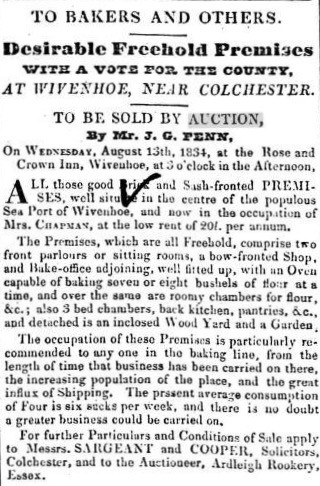 Advert for the auction of the Bakery in the centre of Wivenhoe to be held on 13 August 1834.
Wivenhoe Memories Collection

Last’s Bakery was one of three Bakeries in Wivenhoe.  The 1911 census shows a Charlotte Last was living on the premises. She was married to William, a baker.  The man on his trade bike is Bert Marjoram who worked for this Bakery delivering bread all around the area.

In the 1834 auction, the oven is advertised as being capable of baking 7 or 8 bushels of flour at one time. (Equivalent to approx. 18.6 kilograms of dry flour today)

The large oven was down the steps at the back of the building, and today the steps and one small oven can be seen inside ‘Valentino’s’ Restaurant.

Last’s bakery on the left in the photograph was situated in the building which was once ‘The Grapes’ Inn, just look up to the eaves, to see the decorative pargeting.

There is reference to this building dating from 1767, when a Jonathan Barker was living here.

Next door to the Bakery was where the family lived and this part of the premises later became Halsey’s Bakery in the 1950s.