Ian Valentine based on research by John Stewart & CWGC records 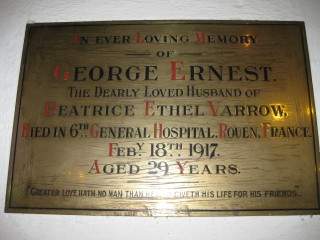 Plaque inside St Mary's Church Wivenhoe to the memory of George Varrow who died of his wounds fighting in WW1.
Peter Hill

164966 Sapper George Ernest Varrow  was born in 1888 in Sudbury, Suffolk, the first son of William Varrow (a publican) & Elizabeth Mills. He was educated at Soham Grammar School, Soham Cambridgeshire.

His marriage to Beatrice E. Ham, of The Firs, High Street, Wivenhoe was registered in Apr-Jun 1913 at Lexden in Vol 4A, page 1287.

He enlisted in the Royal Engineers and initially served in a R.E. General Base Depot.

He died of wounds on 18 February 1917 in the 6th General Hospital, Rouen, aged 29, and was buried in Grave ref: O.V.I.5 at St. Sever Cemetery Extension, Rouen.  He is not named on the Wivenhoe War Memorial but has a plaque to his memory inside St Mary’s Church in Wivenhoe.

It is believed that Beatrice Varrow may have paid for the erection of the War Memorial in the Churchyard but it is not known why she chose not to have his name on the Memorial but to have plaque inside the Church commemorating his memory instead.