Born 1877 and served on many boats and ships

Arthur Shead as a member of the crew of the yacht Sea Maid.
John Stewart NMI 04543 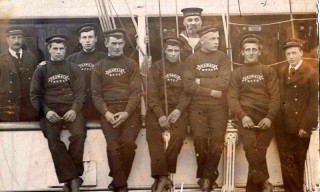 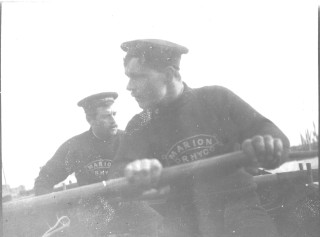 Arthur Shead rowing, his Marion crew jersey means that this photograph must have been taken in 1903. 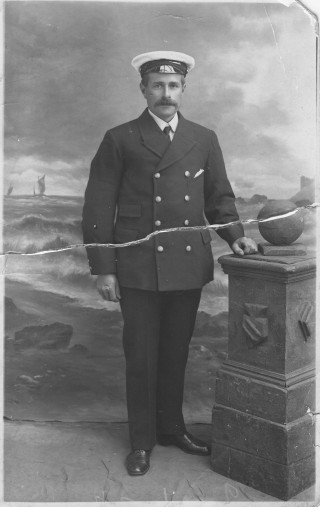 Arthur Shead in his boatswain's uniform.

Arthur Shead was born at Wivenhoe in 1877. In 1901 he was described as 5’7″ with grey eyes, brown hair and a fresh complexion.   On the 12th May 1901 he married Gertrude Jane Gilbert of Wix at Wivenhoe.  The timing of the wedding is significant, because on 13th May 1901, in Brightlingsea, he signed on the steam yacht Gunreda for a voyage to Halifax Nova Scotia.  This was a one way delivery voyage because the Gunreda was to remain in Canada, having been bought by a Canadian owner.  Although this is the first entry in the Certificate of Continuous Discharge that still exists, he must already have been an experienced seaman as he was rated as A.B.

He signed off the Gunreda in October 1901, and his next ship was another steam yacht, the Marion which he again joined in 1903 at Brightlingsea, this time as boatswain.  He signed off the Marion on 12/9/1903 and joined the Rannoch  in May 1904.  He stayed with the Rannoch until October 1913, although he was not usually employed on the yachts during the winter months, when, presumably he worked on fishing smacks.

In every entry his conduct was described as very good.

To see a photograph of Arthur Shead’s family, click here