Created by Ian Valentine and added to by Peter Hill 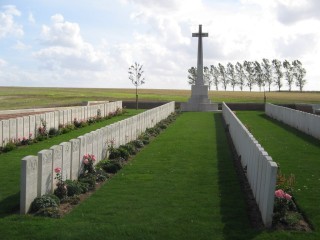 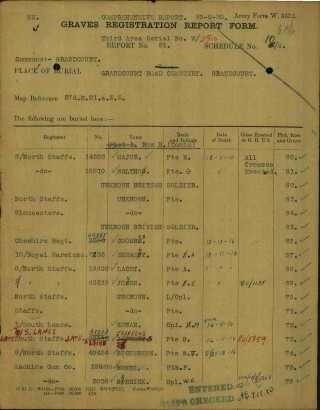 The Grave Registration Reports (GRRs) used by the War Graves Commission to record all of the burials within a particular burial ground.

The entry for Horace Bones

Horace T. Bones was born in Wivenhoe according to Essex Regiment Museum record card, the son of Mr. A. Bones of Clay Lane, Ipswich Rd, Colchester, and who it is believed came later to Wivenhoe.  Horace served initially as Private 24059 in the Essex Regiment, then later as Private 10488 in the 54th Company, Machine Gun Corps (Infantry).

He was killed in action on 18 November 1916 in France.  He was buried in Grave B.75 at Grandcourt Road Cemetery, Grandcourt, Somme.

From the Commonwealth War Grave Commission web site about the Grandcourt Road Cemetery:

Grandcourt is a village about 11 kilometres north-north-east of the town of Albert. The Cemetery is 1 kilometre south of the village in the direction of Thiepval on the D151 road.

Grandcourt was reached on 1 July 1916, by men of the 36th (Ulster) Division, but it was not taken until the night of 5/6 February 1917 when patrols of the Royal Naval Division found it deserted. It was in German hands again from April to August 1918.

Grandcourt Road Cemetery was made in the spring of 1917 when the Ancre battlefield was cleared.

The cemetery now contains 391 burials and commemorations of the First World War. 108 of the burials are unidentified but there is a special memorial to one casualty known to be buried among them.