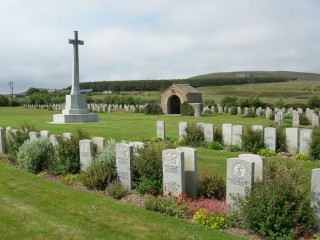 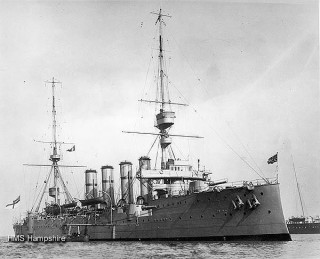 The HMS Hampshire which struck a mine and sank off Orkney
From www.hmshampshire.co.uk

Born 1897 in Southwick, Sussex. Son of Eleanor and George Salisbury and brother of Frederick, William Salisbury was a Marine Engineer. The family moved to Wivenhoe and lived in New Town Field around 1911.

Engine Room Artificer 5th Class William Hunter Salisbury was serving in HMS Hampshire  when she was mined and sunk off Orkney on 5 June 1916.  He died as a direct result of enemy action and is buried at Lyness Naval Cemetery, Island of Hoy, Orlmoyn.

H.M.S. Hampshire was a 10,850 ton armoured cruiser armed with four 7·5 inch, six 6 inch and twenty two 3 pounder guns, built in 1903.  She hit the headlines for the worst possible reason for she sank with a heavy loss of life, and Lord Kitchener was among those who were lost.

In 1916, whilst taking Lord Kitchener to Russia, suffering bad weather conditions, the ship hit a mine in Scapa Flow, the area having been compromised by German U boats. William along with Lord Kitchener and 663 people on board perished. The weather was so bad that the life rafts with 70 men rescued could not land and all but 12 died on the rocks and beaches. A conspiracy theory surrounding Lord Kitchener survives to this day regarding this event.

Unfortunately we have been unable to find a photo of William Salisbury.