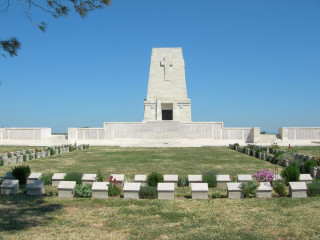 2143 Private Hugh Herbert Husk was born 26 February 1879 at the Folly in Wivenhoe. He was the third child of Nicholas James Husk (Boat Builder) & Maria Leman.

He enlisted on 28 April 1915 at Liverpool, New South Wales, naming his stepmother as next of kin.   He embarked on 16th June 1915 from Sydney, NSW, on board HMAT A63 Karoola for Gallipoli.  He served in the 3rd Battalion 6th Reinforcement, Australian Imperial Force.

He is reported to have taken part in a charge on a Turkish trench on or about August 6, and from that time nothing has been heard of him.  He was presumed killed in action between 7 & 12  August 1915.  He has no known grave but is commemorated on Panel 20, of the Lone Pine Memorial, Gallipoli, Turkey, and on Panel 36 of the Australian War Memorial, Canberra.  He is also named on the Wivenhoe War Memorial.

He was awarded the 1914/15 Star, British War and Victory Medals, which were sent to his stepmother.