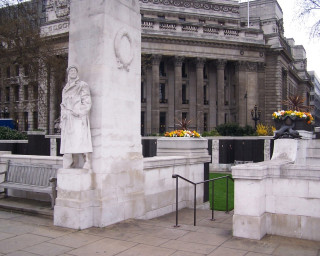 William was a fisherman who served in the Mercantile Marine out of Grimsby on the Steam Trawler Queenborough GY658 {165 tons).  He died at sea on 21st March 1917 along with the 8 other crew members.  He has no known grave.

His name is listed on the Tower Hill Memorial, Trinity Square, London, that is dedicated to the Merchant service and fishing fleets.

Notes to Congregational Church Board say that the Queenborough was sunk by shelling. Wiliam’s name is recorded on WIvenhoe War Memorial.

Later research shows that the Queenborough was shelled and sunk by a German U-boat No.86 on 23d March 1917 whilst trawling for fish in the North Sea, 106 miles east of Peterhead.  According to the official report, the cCrew seen to abandon vessel and sail away in the trawler’s lifeboat, but the lifeboat and crew were not recovered. Vessel posted as missing. The suspicion is that the U-boat Captain, (Friedrich Crüsemann), ordered the sinking of the lifeboat on the basis that he did something similar to a Hospital Ship which he attacked and sank, as well as sinking the lifeboats.