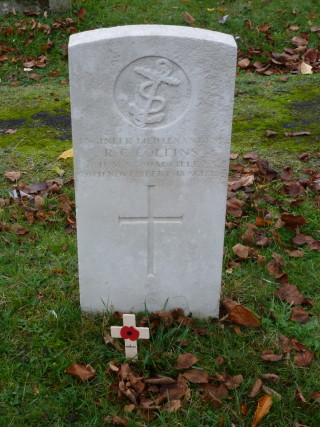 He was born in 1889 in Burwood, Sydney, Australia, the son of Charles P. and Florence Agnes Ferguson.  Husband of Sybil Alice Collins,   9, Rectory Road.  He served on H.M. Minesweeper Quadrille.

John Collins says: “HMS Quadrille was a shallow draft minesweeper built in September 1917, and sold 1919.  As she was not sunk, she may have been damaged by a mine during a post-war clear-up, or he may have suffered an accident – possibly he died of the Spanish ‘flu or some other disease.”

Reginald Collins died on 26th November 1918 in St. Thomas’ Hospital, London, aged 28.  His funeral was reported in the Essex Newsman on 7th December 1918.  He is not named on the Wivenhoe War Memorial nor in MoD records.  He was buried on 5th December 1918 in Wivenhoe New Cemetery, Grave location C.258/259.