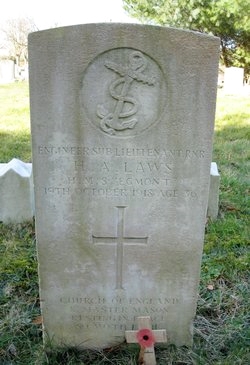 In the 1901 census, he was living in The Avenue, Wivenhoe and his occupation was given as a Marine Engineer. He was husband of Johanna Beatrice Lockley.  He served on H.M.S. Egmont.   According to Notes to the Congregational Church Board ‘Men Lost at Sea 1914-1918’ he died on 19 October 1918, aged 36, in Portman Square, London.  “His body having been removed from a Parish in London” he was buried in Wivenhoe New Cemetery Grave D 13 on 24 October 1918.

His parents were living at 6 Wetherby Road, Boroughbridge, Yorks at the time the headstone was prepared.  He cannot be found in MoD records and is not named on the Wivenhoe War Memorial.

John Collins says HMS Egmont was a base ship, a ‘stone frigate’ in Malta, possibly servicing submarines.  He may have died from an accident, or illness (perhaps from the Spanish flu’ epidemic?), or on attachment to another ship.