You are here: Home>Topics>People>Other People>About Andrew Murray who died in 2013 aged 97

Andrew was married to local photographer Sue Murray for 59 years 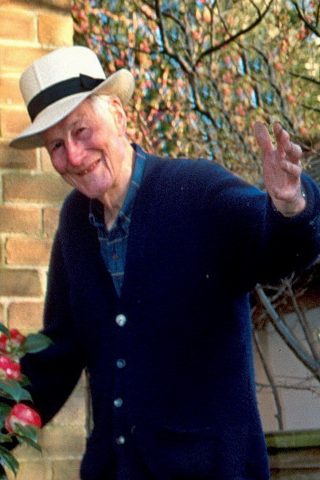 I have been asked to say something about Andrew by Sue, his wife for 59 years and his daughter Anna.

I feel honoured and privileged to talk about a man I admired.

Andrew was a familiar figure walking up and down Wivenhoe, pretty much every day for the last several years. Increasingly over these years his frame had become more bent and he would walk with some difficulty, using a stick to help maintain his balance but always with that dogged determination that so characterised the man.

He was such a familiar sight that Wivenhoe will be a poorer place without him. He was an inspiration to everyone who saw him although I must confess to have been genuinely shocked when I learnt from Sue that he died at age 97. Maybe it was the Scots blood in him, or the daily glass of red wine, that kept him going for so long. Who knows but we can all admire that determination.

Scottish parents with a long lineage

Andrew was born of proud Scottish parents whose family can trace their line back through the family of Murrays of Blackbarony to the first baronet of the family, Sir Archibald Murray. He was created a baronet in 1628 and whose forebears had already owned the castle at Blackbarony through five generations by that time.  The Digby in his name comes from the marriage to Anne Digby of the noble Digby family by one of those ancestors and so the name has been carried down through the generations.

Andrew was born on 26th April 1916, educated at Winchester College and afterwards at the Royal Military Academy at Woolwich.  His father was a distinguished soldier like other earlier Murrays and therefore it should be no surprise that Andrew joined the Royal Artillery, achieving the rank of Lieutenant-Colonel.

Most of his military service was in the Far East in places like Singapore. One of the many stories that Anna and Sue can tell was of Andrew being put in charge of a group of Chinese soldiers who were on a football tour of the region. I will let you imagine Andrew, standing well over 6 foot, and the company of much smaller Chinese soldiers. In fact Andrew got on with them extremely well and it seems that he was very upset that he wasn’t allowed to eat with them for cultural reasons. That was typical of the man.  He was very personable, not at all high and mighty; indeed even a gentle man but a man of some authority.

His first marriage in 1947 to Joan did not last very long. Anna and her younger sister Lali were both quite small when he and Joan split up. They both remained close to their father over the years although they grew up with their mother. Sadly Lali died not so long back.

A second marriage to Sue

Andrew later met and married Sue, or Susie as he would call her.  Sue had also been previously married to Bryan Wynter who was a well-known St Ives painter but she had been developing a career of her own in toy model making and selling toys to such up-market stores as Harrods, Fortnum and Masons, and in the Burlington Arcade.  Her business, The Toy Trumpet Workshops, became well known, later moving premises from St Ives and eventually to Brightlingsea.

Sue’s two children with Bryan, Jake and Rebecca, grew up with Andrew and called him father although they spent their holidays with Bryan and knew him as their father too. Jake sadly died at age 32 after a short illness.

After Andrew’s military career, he went into market research where his great talent and skills for conducting detailed analysis into a wide variety of subjects came to the fore.  He became an expert on such subjects as Danish Bacon, breast milk substitutes, the relationship between smoking and lung cancer for the tobacco industry, and Clive Sinclair’s C5 electric car.

Involvement with the CND

In the 1960s, Sue encouraged Andrew to get involved with the CND movement and together they joined the first Aldermaston March in Easter 1958. Andrew became deeply involved with CND marches, becoming a founder member of the CND Committee of a Hundred in 1961. On one occasion, he used his military skills to organise a march by one half the CND protestors from Aldermaston, all 25,000 of them, which met the other half of the protestors, another 25,000 people, who were marching from Wethersfield in Essex. They met together at the foot of Whitehall to march together peacefully to a rally in Trafalgar Square at the exactly the right time and place as instructed by Andrew.

Sue and Andrew came to live in Wivenhoe in 1971 after Sue had found much larger premises in Brightlingsea in 1969 for her flourishing Toy Trumpet Workshop. In 1984 though she sold the business and took up photography, becoming a familiar person in Wivenhoe with her camera. That was how I got to know her, in the 1980s, taking photographs of the Wivenhoe Carnival which I used to run at that time. Sue and Andrew first lived in Brook Street, opposite the Brewery Tavern, which has long since been demolished and replaced with another building, before buying the house in De Vere Close where they lived from 1983.

Andrew was something of an intellectual with a deep interest in philosophy, and he would always be reading. His study is full of books on the subject. He loved to attend courses and lectures at the University. Both Anna and grandson Daniel have happy memories of long walks with Andrew during which he would often talk about work by such philosophers as Spinoza and Ludwig Wittengenstein with whose works he was very familiar.

He also loved poetry. He had many poetry books in his study that he would enjoy reading. He copied many of them into a little book that he carried around with him. He knew many of those poems off by heart and could recite them at will.

Proud of his heritage

Andrew was proud of his heritage. With Anna on holiday in Scotland some years ago, they visited the family castle of Blackbaronry, in Peebles, which today is a hotel. Walking up the steps of the hotel, he grandly announced to the Manager that he had come to see the family home.

A last glass of wine

On the Friday evening before he died, he and Sue were playing bridge with two friends, Ruby and Richard, which he and Sue did most Fridays. That evening, in one of the hands, Sue set him up to win a Little Slam, winning 12 tricks. He poured himself an extra large glass of wine to celebrate that evening.

He left this mortal world on the very day that another determined Murray finally won at Wimbledon. Whilst that Andy might be better known than Andrew Murray, those who knew and loved Andrew appreciated his many gentle qualities, especially his humility and that dogged determination which caused him to be out walking in Wivenhoe whatever the weather.