You are here: Home>Topics>People>Other People>About Sue Murray ARPS who died in 2013 aged 90

An avid photographer but a renowned toymaker in her earlier life 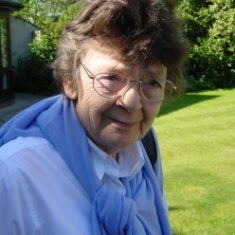 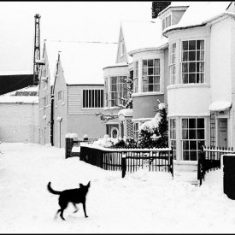 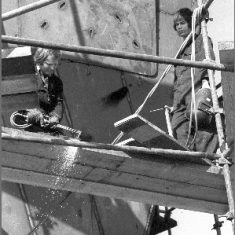 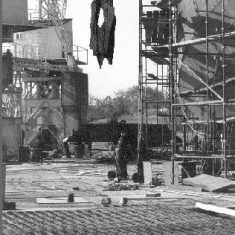 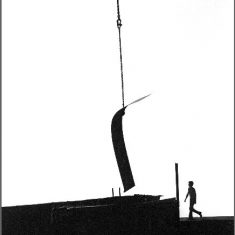 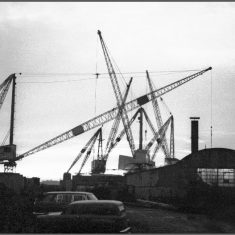 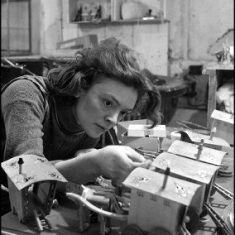 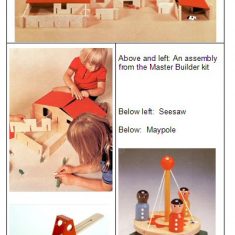 
Sue Murray had been a familiar figure around Wivenhoe invariably with her camera from the 1980s until the time of her passing on 21st September 2013, after a long slow illness and then a short spell in hospital.  This was just 3 months of the passing of Andrew, her husband for 59 years.


She earned her Associateship of the Royal Photographic Society (ARPS) in 1985 with a collection of photographs which she describes as her ‘Art’ pictures. She was very proud of those initials after her name.  She has shown her work of people and subjects around Wivenhoe in many local exhibitions as well as further afield.

She has taken hundreds of photographs of mainly people and local events in which she has taken a great interest. Some of her photographs she has allowed to be used in this Wivenhoe website.  Reproduced here on this page are some of Sue Murray’s wonderful black and white photographs taken of activity in Cook’s Shipyard when it was alive with the sounds of more than 200 men working to build really quite large ships, large that is in terms of the size of the River Colne.


“Apart from the community events and contributions to Wivenhoe Town Council’s promotions, the main feature of my work has been documentary, much of it for the Essex Record Office and English Heritage, through the Wivenhoe Society.  My last major project was a four year record of the construction of the surge barrier on the River Colne.  But now in my eightieth year, it is an emergency! I must capture precious moments in time – never repeated, and, because of my camera, never forgotten.” Sue Murray in 2003

Sue has always been a very modest person. She started a business at the age of 23 designing and producing a wide range of high quality wooden toys – Toy Trumpet Workshops Ltd.  In 1971 she brought it to Brightlingsea, setting up workshops in the barns opposite All Saints Church.

In 1985, the quality of her work was recognised by the Tate Gallery in St Ives which included one of her posters in an exhibition and referred to her as ‘Sue Wynter, the magical toymaker’.  Sue had become ‘Sue Wynter’ in 1949 when she married Brian Wynter, the painter.


In 2008, 25 of her designs were exhibited in the permanent collection at the Museum of Childhood in London. She sold the business in 1984, came to live in Wivenhoe, and devoted her energies to photography.

Her significant and influential business has been written up and published by the ‘Reminiscences of Brightlingsea’ Group of University of the Third Age (U3A) in Brightlingsea.


The Museum of Childhood in London, part of the Victoria & Albert Museum, created an exhibition which included toys designed and produced by Wivenhoe resident, Susan Murray (formerly Wynter).

Sue had set up her company ‘The Toy Trumpet Workshops’ in St Ives in Cornwall as a young woman in 1946 sharing premises, initially, with a local undertaker. She built this into a successful business, with an international reputation, producing a wide range of high quality wooden toys and selling to major outlets like James Galt and the Educational Supply Association.

Originally, Sue designed what she describes as ‘glass case’ pieces: toys bought by collectors for their quality and craftsmanship but later, with two children of her own, Susan realised these toys had no place in the nursery. She re-thought her approach to emphasise function and education and this development proved highly successful. Susan’s designs were exhibited at the Design Centre, at the Venice Biennale and at British Pavilions at overseas fairs. She sold to stores like Harrods, and Fortnum & Mason.

The firm later moved to London and in 1971 came to Brightlingsea where Susan set up her workshops in the barns opposite All Saints church. At its peak, in the early 80s, the firm had a turn-over of about £200,000 a year, employing over ten local people.

In 1985, the quality of her work was recognised by the Tate Gallery (now Tate Britain) which included one of her posters in an exhibition and referred to Susan Wynter as ‘the magical toymaker’.

For the  exhibition in 2008, the Museum of Childhood acquired 25 of Susan’s designs. They now form part of their permanent collection.

A booklet telling the story of Susan and her designs was published by the Reminiscences of Brightlingsea group of the U3A in their ‘BRIGHTLINGSEA HERITAGE’ series. See their website – click here

Following Sue’s passing in 2013, I was asked to write an Obituary for Sue who I had got to know and liked very much.

Sue was born in London on Sunday 1st July 1923 and given the names Suzanne Mabel Lethbridge Karlenburg but was always known simply as Sue, although to Andrew, her husband of 59 years who died just three months ago, she was Susie.

She grew up in Chelsea as an only child with her determined mother whose marriage didn’t last that long. Her mother went through some tough times eventually becoming the first female estate agent in Chelsea and built a very successful business. In consequence she was able to afford to send Sue to boarding school.

As a child Sue had an affinity with wood, often playing with off-cuts in the neighbouring factory workshop of billiard makers, Thurstons. This was the beginning of her own toy-making business, Toy Trumpet Workshops, making wooden toys for children which she began when she was 23.

She started it after moving from London to St Ives in Devon where she met and married Bryan Wynter, who went on to become a well known artist.  She had three children by him. Very sadly her daughter Jessica only survived a few months and her son Jake would die at the tragically young age of thirty-one but Rebecca is living in Brightlingsea and married to the son of Margaret Dunne, a former Town Mayor of Wivenhoe.

After her marriage to Bryan folded, Sue moved initially to London and then to Brightlingsea in 1971 with her growing Toy Trumpet Workshops.  She was soon supplying quite elaborate trains and other models in which she specialized to top stores like Fortnum and Mason and Harrods. These were so good they became collector’s items. In 2008, 25 of her toy designs were exhibited at the Museum of Childhood in London.

She sold the business in 1984 and took up photography becoming well known in Wivenhoe taking photographs of the Wivenhoe Carnival each year, and recording events and buildings for people like the Wivenhoe Society, the Essex Record Office and English Heritage.

Perhaps the best known of Sue’s local pictures is a much reproduced, panoramic shot of the Wivenhoe Waterfront. There are other examples of her work on the Wivenhoe Encyclopedia.

She earned her Associateship of the Royal Photographic Society in 1985 and was very proud to have the initials ARPS after her name.

Sue has always been a very modest person.  She had a wicked sense of humour, was a strong and unconventional character with an inherited determination. Whilst her health deteriorated during her last few years, she was still able to get out and about, and play bridge, every Friday evening with Andrew and two good friends from Colchester until he died in July.  She and Andrew lived in De Vere Close for 30 years.