Joyce is the daughter of the yachtsman, Ben Blackwood. She became a teacher and a pioneer woman sailor. She was born in Queens Road in 1928 and lived there for 83 years. 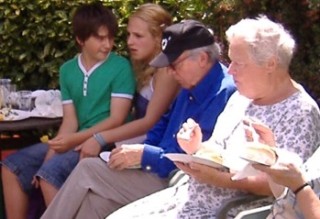 Joyce at a QRRA Summer Party in 2009
Pat Marsden

Often these days, I see vans such as Tesco’s Asda Waitrose etc. delivering shopping, ordered no doubt on computer or by phone. When I was a child, we too had our home delivery services! The baker would call with a large wicker basket covered with a clean white cloth. There was a variety of loaves and rolls to choose from. Mum usually asked for “A large white tin, please” pay on the spot and say “Call again in a couple of days”. The milkman arrived with his handcart on which were bright shiny milk pails. He would come to the back door with one of them and measure out a pint or half pint into a jug with ladles which hung on the side of the pail. In summer the milk had to be boiled to keep it from going sour too quickly and a lovely thick skin would form on top which I had on my “Aviator Wheat Flakes”.

The fishman (there were two who called at our house) had several varieties to choose from. Fish was for Fridays and it was usually cod. In season, there would be sprats. Sometimes when there was a glut they would be landed on the quay and you could pick up a bucketful for free. Mr Green would come round again in the afternoon with shrimps which made a lovely treat for tea. He used wooden pint or half pint measures and put them into a dish which mum always had ready. A greengrocer came with his horse and cart with whatever was in season, not a great variety but fresh. He also brought jars of horseradish in vinegar which was so pungent you felt as if the top of your head was coming off. His wife must have spent hours with tears running down her cheeks while scraping it!

The Co-op was the first to use a motor van. It sold a wide variety of things but mum used to buy her soap (always Lifebuoy) soap powder (always Rinso) and paraffin oil. In the winter we always had an oil lamp for lighting until seven thirty when we would then switch on the electric – we saved money that way. The oilman gave you a little pink ticket with the total amount spent and your dividend number on it ours was 15822. You could collect your dividend twice a year, mum saved hers for Christmas. If you needed something large moved or something heavy brought from Colchester you asked the local carrier Mr Wyatt to get it for you for a small charge. At that time you were able to buy almost anything you needed in the village. Before the war I can remember two bakers, three butchers, two hardware shops two or three where you could buy various garments, a haberdashers and numerous grocers and little general stores, It was a different world!