You are here: Home>Topics>People>Other People>Toni Stinson retires as Town Clerk 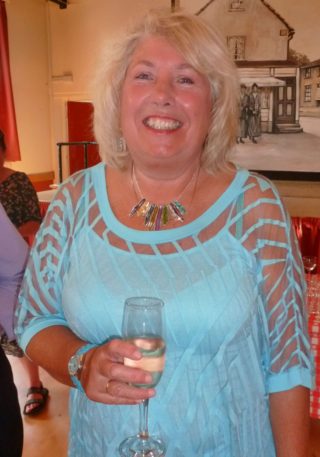 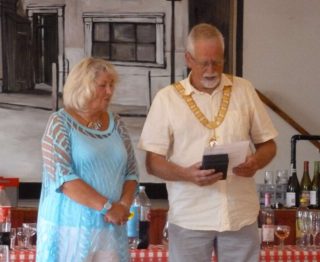 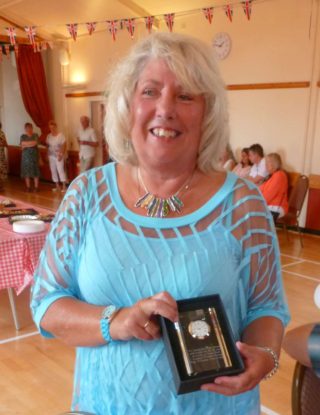 Here is Toni Stinson’s story of her 43 year career working for Wivenhoe Town Council, having first started in its predecessor authority, Wivenhoe Urban District Council, in 1970.

I knew her during my time as a Town Councillor from 1983 to 2008 and have many memories of her during that time during which she progressed from being Office Assistant to Town Clerk of the Council.  Peter Hill

About 23 staff were employed and at 17 I was the youngest.  I worked through power cuts and remember having to work by Tilley lamps and candles in our office.  We worked till 5.30pm and on Fridays had to stay until 6.30pm!   I delivered agendas on my bicycle and remember going round councillors’ houses getting cheques signed. I also had to make the tea and on someone’s birthday I was sent out to get cakes.

Outside there were about 15 men – refuse collectors, rat-catcher, sewer operators, digger-drivers, plumber/repair/handyman, grass cutters, grave diggers.  The dustcart was an old purple monster – it thundered into the yard every day at about 3.20pm after emptying its contents at the refuse tip (top of KGV field) Men all jumped out laughing and joking with each other, clanging metal bins around. They went to get washed up in the yard and every Friday afternoon they had to completely hose down the dustcart, splashing water everywhere and scrubbing it with yard brooms.  There was one man in particular who was always finding things amongst the rubbish either to wear or show us through the window.  One day he came in with a violin and went round the yard playing it.

The Chargehand came in at 3.30pm every day in bib and brace and he always smelt of Jeyes fluid.  There was another man whose job it was to ride round the town every night on his bicycle and write down all the streetlights which were out.  It was one of my jobs to ring this list through to the Eastern Electricity Board at Clacton.

My very first job that day was adding up the stamp book and making it balance.

Whenever it was someone’s birthday they had to buy cakes.  I was always sent down to the Bakers to get the cakes and I had to take them round one by one to all office staff.

At Christmas time there was a real atmosphere – we went to The Albert one year for Christmas lunch, sometimes we had an office party.  We were all given a half day off to go Christmas shopping.  We had football syndicates and sweepstakes for big races.  We all got a Christmas present as well.

As my first week was Easter we had hot cross buns on Thursday – When the week finished we all went home, everyone wishing everyone else a happy Easter.

On Fridays we always worked till 6.30pm – although I never really understood why.

While I was there we had power cuts – we had candles in the office and paraffin heaters.  It was freezing.

I left in 1972 to go temping, I liked this and I did it for two years.  One day the agency rang me up and asked me to go to Wivenhoe Town Council to help out (by then this was April 1974) – I thought the UDC had been dissolved, but the agency said they wanted someone who had worked there before to help the new Clerk.

I walked through the front door into a ghostly office, totally devoid of staff.  There sitting at an old desk was an elderly man – he had been recruited as part time Town Clerk to the successor Wivenhoe Town Council.  All over the place were dusty black ‘Twinlight’ lever arch files and tons of manila folders.  The kalamazoo receipting system was still in place along with the Olivetti adding up machine and one manual typewriter.  The rest of the offices were empty, just bits of paper laying about.  Doors swung eerily, revealing blank empty rooms.  The upstairs was just as bad.  I peered into the Council Chamber, dreary drab old curtains hung in threads, but the old meeting table was still there, pebble-dashed with cigarette burns and ring-marks from cups of tea.  The Chairman’s gavel and the school bell shoved up together in one dusty corner.

The Clerk announced that he only worked till 1.00pm.  So for the afternoon I was all on my own in that place.  The hours dragged by – the phone never rang and no-one came in, at 5.00pm I could’nt wait to lock up and go home.

To keep busy I did some cleaning, I found some Reckitts polish in an old cupboard and a dusty broom and I really went to town.  I swept up spiders, beetles and horrible silver fish. I unearthed old notices about Fire Precautions in War time and Evacuation Notices. A strange bundle of papers tied with string and labelled ‘The Relief of Mafeking’   I did’nt know what to do with a lot of the stuff so I left it where I found it – just tidied it up a bit  – most of it is still there to this day.

There was just one meeting a month and I did all the typing on a stencil and duplicated it with the hand-operated Gestetner.    I used to get the ink all over me.  When typed up I had to read my Gestetner copy of the minutes to the Clerk and had to make corrections with that awful pink correcting fluid  (of which I still have a few bottles!)   There was an old liquid photocopier machine but the liquid had all crystallized and it smelt and gave off fumes!

My typewriter broke and it had to go before Town Council to agree to buy a new one at £49.

Over the years I assisted four Town Clerks.  Each time one went and the council recruited a new one they wanted me to stay and show each Clerk the ropes.  The last Clerk in office (1992) persuaded the Council to buy a computer, which we did at a cost of £2,000!!  The printer was equally as expensive. They handed me the manual and that was that.  The machine was a great big clumpy ms-dos thing, with a printer which used paper with holes at the side.  I taught myself how to use it and eventually mastered it well. Then it was windows – we ordered a new machine from Time. It came and again I was left struggling with boxes, hardware, software, set-up etc. but at least I had some help from the wife of one of the councillors who had worked on this machine herself.   Next came email  and again I was left to sort it out, which I did and even installed a modem and router myself…..grovelling about under my desk poking bits of cable this way and that…..this went on constantly over the years, new cllrs….more and more technology ….but at least I was let off from crawling under the desk when an IT person was recruited to do this.

As I said I came here to help out in 1974 and have been here ever since.  Sometimes a person comes in and says “oh you’re still here – you were here when it was the UDC”

Things have changed so dramatically over the years.  It is totally different from those Gestetner years………where we held genteel meetings, Cllrs wore suits, acted and spoke courteously to the Clerk and invariably were elderly and pillars of the community.  Today is far removed from those humble beginnings.

I’ve worked Gestetners, liquid photocopiers, painted our ‘crib’, run around like a mad thing on the wellie-throwing stall at the annual Teddy Bears picnic, helped set up and clear up 25 Mayor’s Balls, several New Year’s Eve dances and  Christmas parties for the elderly, picked up litter from the field, painted decorations for several Mayor’s Balls, made shepherd’s pies, curries, sandwiches, cakes, all sorts – you name it I’ve done it.

Councillors came and went – some died in office – but I carried on.

Ideas came and went – some came to fruition, such as the minibus, refurbishment of  William Loveless Hall, the skatepark, the new Pontoon, some fell on stony ground.

Some major items dealt with over the years

So here we are in 2017 – having really moved on!  When I first stepped over the threshold in 1970 we owned this building and it is nice to know that as I leave we own it once again.

I have enjoyed my time with Local Government, but now am pleased to be retiring from it and to spend more time on activities that I so enjoy, reading, travelling, drawing, painting and crafting, and also just to have time to sit by my coal fire reading a book……..