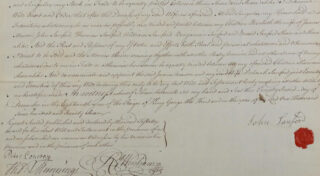 John Sanford was an Oyster Dredger. He was married to Deborah Sanford, he being her second husband following the death of her first husband, Robert Hopkins.

John and Deborah had 6 children.

When John died his Estate was left to his wife Deborah.

The Will states that on the decease of Deborah all effects would go to his son Thomas.

On Benjamins death it would pass to Edward.

His stock in trade was bequeath to William and Benjamin

His only daughter Elizabeth who was married, would inherit the property in which she was living with her husband and which belonged to John Sanford.

The only bequest to his eldest son, John was a share in household goods and a share in any monies owing

All of these were also shared equally amongst the 6 siblings.

He nominated his wife, Deborah and his son in law to act as executors.

Will of John Sanford

Late of the Parish of Wivenhoe

Signed Sealed published and declared by the said Testator

Presence and in the presence of each other

James Mason one of the Executors within named

Appeared and was sworn to the truth of the within

Will and to the due execution thereof (powers being reserved

To the other Executors within mentioned) before me

NB The Testator died in Wivenhoe on Friday the

The last Will and